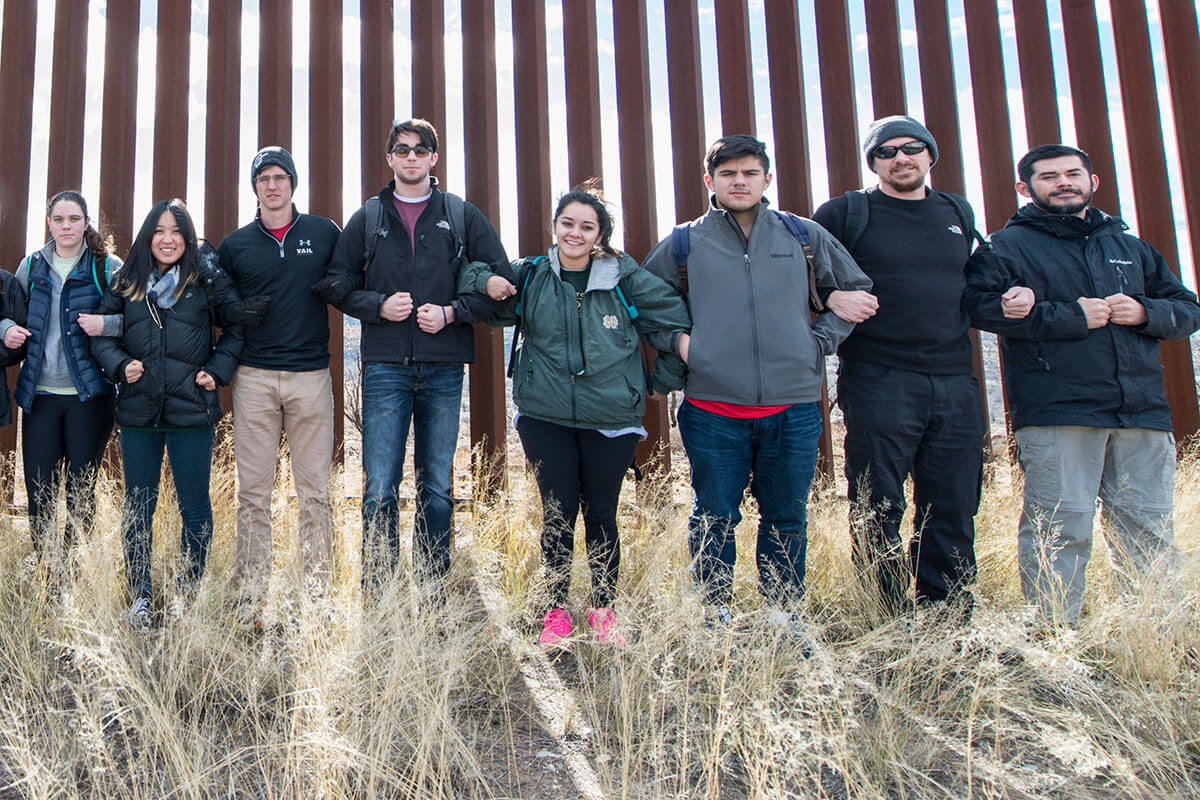 Kraig Beyerlein (second from right) and Notre Dame students stand at the U.S.-Mexico border on a private ranch in southern Arizona. Beyerlein has taken students to the border for the past eight years as part of a service-learning seminar through the Center for Social Concerns. 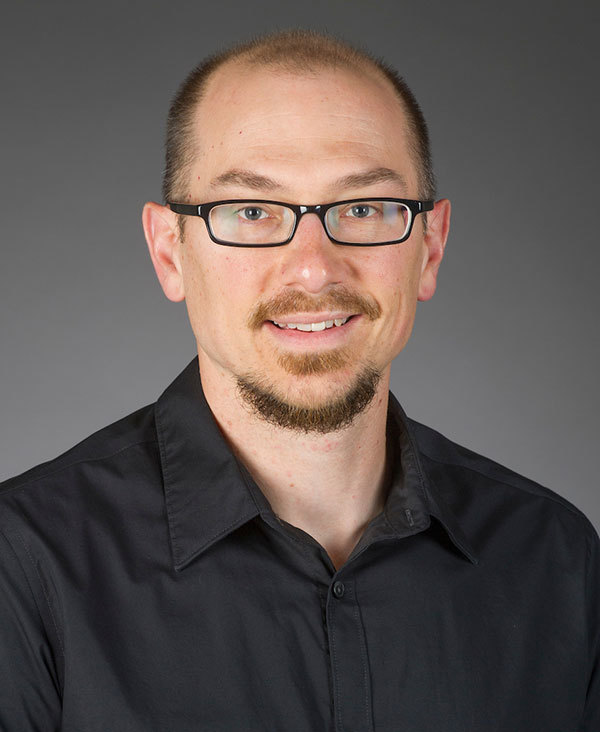 There are two sides to every story. And for Kraig Beyerlein, there’s a side of the story about religious activism that has not been fully told.

“When we hear about religion and activism in the United States we tend to think of the Christian right,” said Beyerlein, a Notre Dame associate professor of sociology who studies protest movements. “There’s certainly also a progressive side to religion. It’s always been there, but it is less emphasized in the media and popular culture. And in the academy, it is studied less.”

Beyerlein points to examples such as then-Notre Dame President Rev. Theodore Hesburgh, C.S.C., locked arm in arm with Martin Luther King Jr. to show solidarity for civil rights; the black church as a key infrastructure mobilizing for racial justice in the U.S. South in the 1960s; and Protestant, Catholic, and Jewish communities’ involvement in the U.S. Central America peace movement of the 1980s as signs of that activism.

And another moment of progressive religious activism — the Women’s March — has begun following the election of Donald Trump, according to Beyerlein.

As crowds of more than 4 million marched throughout American cities the day after Trump’s inauguration, marking the largest single-day protest in U.S. history, Beyerlein wondered whether religion was part of the resistance.

He looked at the website for the Chicago Women’s March and discovered that there were 30 to 40 congregations or religious groups listed as official supporters.

Beyerlein and sociology graduate student Peter Ryan traveled to Chicago to interview leaders from these faith communities, who in turn referred them to other participants. All told, his team interviewed more than 125 people, both laity and clergy, from religious communities that mobilized for the Women’s March.

“It’s a really interesting case in which progressive religious activism is entering a generally secular environment. People of faith we interviewed were there in solidarity to let the world know there’s another side to religion,” said Beyerlein, whose journal article with Ryan is forthcoming in Sociology of Religion. “For many of them, participation was about social justice and religious convictions fueling this passion. Their religious convictions say, ‘We can’t support anti-immigration; we’re for women’s rights, human dignity, and human rights.”

“When we hear about religion and activism in the United States we tend to think of the Christian right. There’s certainly also a progressive side to religion. It’s always been there, but it is less emphasized in the media and popular culture. And in the academy, it is studied less.”

Beyerlein, who is also associate director of the Center for the Study of Religion and Society, first became interested in progressive religious activism while growing up outside of Detroit.

“The city obviously has a lot of social inequality, but it also has a lot of interesting and diverse religious communities,” he said. “From a very early time in my life, I was aware of the social inequality in Detroit but also of progressive religion and the ways in which it can help others, reach out, and mobilize for social justice.”

In a region where 100 to 200 bodies are recovered each year — migrants who die attempting to cross the Sonoran Desert — Beyerlein wanted to study the faith-based organizations that were providing humanitarian aid to those attempting the journey.

Combining his quantitative training with interviews with local volunteers, Beyerlein enriched his data with stories of their struggles, challenges, and rewards. 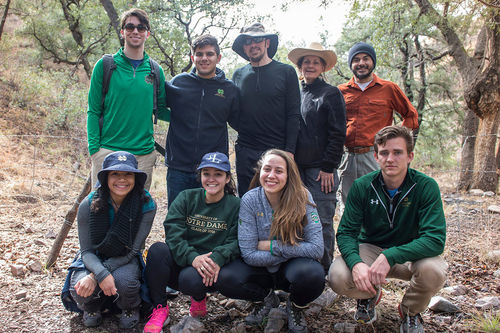 Beyerlein, who is currently finishing a book tentatively titled Social Justice in the Desert: Faith-Based Mobilizing to Save Lives along the Sonora-Arizona Border, continued to work with these volunteers after coming to Notre Dame.

He made connections between groups engaged in life-saving efforts for migrants in southern Arizona and the Center for Social Concerns, which was looking for a new immersion site for its Border Issues seminar class. The service-learning experience provides students with the chance to study firsthand issues relating to immigration and the border between the United States and Mexico.

“This is the eighth year that I have taken undergraduates to the border in January before spring classes begin,” said Beyerlein, who is also a faculty fellow in the Institute for Latino Studies and Kroc Institute for International Peace Studies. “We talk to faith leaders, we meet with immigration lawyers, and we witness the suffering and dire situation along the border.”

In his research on social movements, Beyerlein has found current methods for studying protest events to be disappointing. Newspaper data are frequently used as a source, but only the most sensational events are reported, which provides a limited picture of the scope of activism.

To get a broader view, Beyerlein used a technique called hypernetwork sampling in which he took a random sample of protesters, then asked them to describe the event they attended and to identify characteristics of it, such as size, tactics used, and whether counter-demonstrators or police were present.

Beyerlein’s findings, from the National Study of Protest Events — to which sociology graduate students contributed — will soon be published in an article in Sociological Methods and Research. He is currently working on a number of papers related to religion and protest events.

Since joining the faculty eight years ago, Beyerlein has found Notre Dame to be the perfect place to study an often overlooked aspect of religious activism.

“Everyone here really wants to understand the religious perspective in all different kinds of cases,” he said. “I really appreciate being at a university where the study of religion is encouraged, and we collectively think through the different ways in which religion promotes social justice — and when it doesn’t, why it doesn’t, and how it could in the future.”

“Everyone here really wants to understand the religious perspective in all different kinds of cases. I really appreciate being at a university where the study of religion is encouraged, and we collectively think through the different ways in which religion promotes social justice — and when it doesn’t, why it doesn’t, and how it could in the future.”

Originally published by Katie Boruff at al.nd.edu on April 10, 2018.